Big Spider from South Carolina
Dear Bug Man,
Last summer I had a slight infestation of quite large not overly hairy spiders. It seems like I took out about three this size, including the one which ran across my face at 3 am . After jumping from my face, it hit the carpet with an audible thud. We have a very spider friendly attic and had a bit of a spider sized gap on one end of the pull down attic access stair. I’ve since sealed the crack around the door and haven’t seen more of the big guys. This specimen was found trapped in our bathtub. I could actually hear it scratching around on the sides of the tub in an attempt at escape. If I remember correctly the leg span was around 2+ inches… wish I’d put a ruler next to it. I would have done a “catch and release” but its level of activity made me hesitant to let it out of my sight so I dispatched it with a blast of tile cleaner. I just didn’t want this thing running around in my house with my 5 year old daughter if it’s a bad one. Just so you know, with my daughter carefully supervising, I typically catch and release just about every jumping spider, brown house spider, frog, lizard, etc. which manage to make it into our house. Recently, I’ve noticed a good number of very pale off white or cream colored baby spiders with very fine long legs and about this body shape turning up around the house. They are about 1⁄4” in size (leg span) and are very hard to see because of their color. If you identify the attached photo as being something scary, I’ll definitely try to get an image of the little ones and send it along as well. I know you are covered up during this “buggy” time of year, but I hope to hear from you on this one. I’ve yet to be able to positively make a match to the photos I’ve found on the web. Many thanks,
Kert Huggins
Hilton Head island ,South Carolina 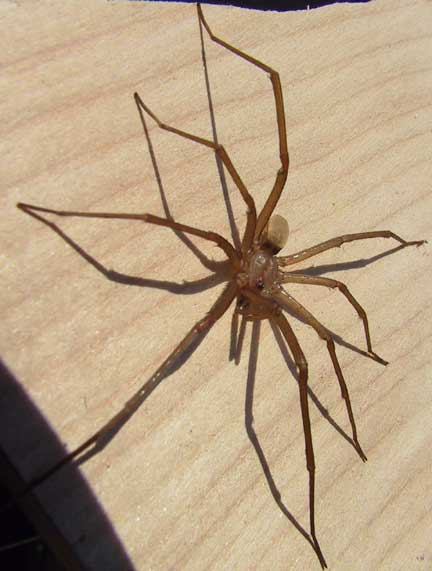 Hi Kert,
My what impressive pedipalps your spider has. We believe this is a Giant Crab Spider in the genus Olios. There is a photo on BugGuide of Olios faciculatus that is a near perfect match. The biggest difference we notice is that the legs on your spider seem considerably more spindly. We would love to get another opinion on this identification.

Update: (07/01/2007)
Olios spider or something more dangerous?
I am not a spider expert as you know, and for sure you may want not to post this alarming suggestion until you are a lot more sure about it than I am, but the non-hairy legs and the shape of the legs makes this look like a recluse to me, maybe like a male of the Chilean recluse? (the Chilean recluse is larger than the brown recluse.) I can’t exactly see if there is a violin-shaped mark on the cephalothorax… But take a look at: http://www.doacs.state.fl.us /pi/enpp/ento/loxoscel.html
Susan

Hi Susan,
We did not want to be alarmist about this, but the stated size and the lack of the identifying violin mark stopped us from posting the nagging suspicion that this might be a Recluse. Perhaps it is time to sound the alarm and see if we can get an expert to weigh in.

Update: Male Crevice Spider (07/02/2007)
Hi Daniel,
I managed to get two spider experts (one in FLA and one here in NYC) to weigh in on the scary-looking spider from South Carolina, and the good news is that it is NOT a Recluse at all (and not an Olios either) but a male crevice spider, Kukulcania hibernalis, family Filistatidae. I asked them if I can send WTB their detailed replies. Let you know soon I hope. Arachnologist, Florida State Collection of Arthropods: “Hi Susan, The photo is of a male crevice spider, Kukulcania hibernalis, family Filistatidae, a species often mistaken for a recluse spider. These are common through the Southeast, especially on buildings. I frequently encounter them in my house. Females have a body length of about an inch, are dark charcoal gray in color, and make flat, very sticky, cobwebs in corners, and around windows and doors. While the females can give a painful bite if trapped against bare skin, the net effect is similar to a wasp sting. It doesn?t cause necrotic wounds like a recluse. When I see males wandering around my house, I pick them up and throw them outside. Hope this helps. Best wishes”
Susan

Hi Susan,
We want to give you and the Florida State Arachnologist a great big thanks.

The second Expert ID on SC spider
This from Louis Sorkin, AMNH, some info that might be useful for you Daniel: “Not a Loxosceles species, nor Olios, but could be a male Filistatid of genus Kukulcania. Hard to tell from the photo even though I downloaded it and magnified it, it wasn’t high enough resolution.Also meant to point out that the eye arrangement is not like an Olios at all, which has 2 transverse rows of 4 eyes each, while the Loxosceles has 3 diads of eyes (6 total). Filistatid spider has a concentration of eyes in front third of cephalothorax, so no diads, no discernable transverse rows. Kukulcania males have long legs and slender body compared to females. His palps are also elongated, but hard to really see the tips in photo. Louis”
Susan

(07/02/2007) Big Spider from South Carolina
Daniel,
I was just about to write and ask it the crevice spider was a possibility based on an image in the following link you sent earlier. The flat very stick web confirms it! They are present all around the gable end vents in my attic space. What appears to be bare wood is covered in a very sticky almost film like layer of web. I was concerned about the potential of a type of recluse as we have relatives in Florida and receive boxes from them regularly. We also spent 3 years in Gainesville, Florida while my wife attended U.F. so a stowaway was a possibility. Thank you so very much for the extraordinary lengths you went to make this identification. I will sleep much better tonight!
Kert Huggins

(07/02/2007)
Great detective work by everyone on the male crevice spider! The angle of the image managed to camouflage those incredible pedipalps, which are a hallmark for ID of the males.
Eric Eaton

(07/03/2007)
I have looked around with Google and wanted to also let you know that this spider seems to be most often known as the ‘Southern House Spider’ which makes it sound even more common and even less threatening… Best,
Susan

Probably NOT Female Southern House Spider
What's That Bug? does not endorse extermination