White-lined Sphinx Moth
Bugman,
I took these shots last year, and from your posts I believe they are white-lined sphinx moths. However, all posts that have identified these moths have come from the California/Nevada area. Is it odd that I took these shots in Oklahoma? Thanks,
Brian Woodard
Oklahoma City, OK 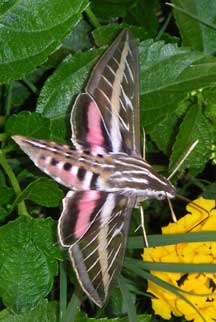 Hi Brian,
This is a White Lined Sphinx Moth, and Oklahoma is within its range. BugGuide has received submissions from the East coast, West coast, South coast and Canada. Bill Oehlke lists the species as being “widespread and common from Central America north through Mexico and the West Indies to most of the United States and southern Canada.”

Vine Sphinx? or Banded Sphinx? Could go either way.