big black beetle bug ID
Hi,
On June 6th in the middle of the night, near Cookeville, TN, I found this beetle type bug outside a restaurant window. It was at least 2 inches long and looks to have big pinchers and a bit of a concave head (like a horns kinda), but I haven’t been able to locate it anywhere online so far… Any idea what it is? Thanks in advance!
Christi Tipton 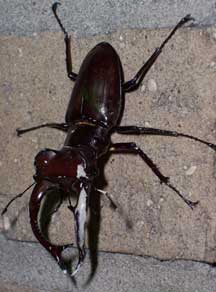 Hi Christi,
We saw your photo two days ago, but couldn’t post it as we were very late. Then we couldn’t locate it among all the new letters. Thankfully, we found it again. This is a gorgeous example of a male Giant Stag Beetle, Lucanus elaphus. They are commonly called Stag Beetles due to the resemblance of the mandibles to the antlers of a stag.

Giant Stag Beetle
What's That Bug? does not endorse extermination