beetle found in Hungary
Hello,
Do hope you can help us, we found this huge beetle on the wall of our in house in western Hungary. All dark in colour, and very aggresive. Approx. 3.5 inches in length and quite heavy. Attached is a photo. We have many hardwood trees and dense forestation almost everywhere in this area. Look forward to hearing from you, many thanks,
Pam Blackhall 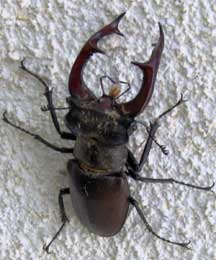 Hi Pam,
Though fierce looking, the European Stag Beetle, Lucanus cervus, is quite harmless. There is a Biodiversity Plan in Sussex posted online that states: “Here in Great Britain, as early as 1941 it was realised that this enigmatic insect held a restricted and discontinuous range, and explanations were being sought. Since that time it has been consistently been listed as a national rarity, although its status as a rarity has been questioned recently. The stag beetle’s distribution in the UK is concentrated in the south-east.” The plan also indicates: “L. cervus is widespread on the continent, and in most countries this insect is protected by statute. However, the beetle is under no immediate threat on the European mainland, although the stag beetle has almost disappeared from a few northern states.”