Black widow??? Not sure…
Hey Bugman…
I was diligently cleaning off a table on the patio when I came across what looks to be a black widow – but I am not certain because of the color and markings on the back. I saw the "hour glass" shape while it was pretending to be dead, but the spots when it flipped back over. I have come across this type of spider previously in another part of So. GA. Are you able to identify? Thanks!
Amy 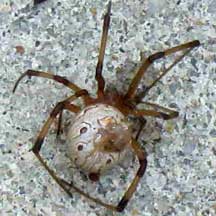 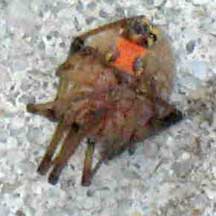 Hi Amy,
This is the not quite as famous first cousin of the Black Widow, known as the Brown Widow, Latrodectus geometricus. BugGuide notes: “The brown widow is highly variable in color. It may be almost white to almost black. Typically, it is a light to medium brown, with an orange-to-yellow hourglass marking on the underside of the abdomen; the coloration of the hourglass often is a good indication of this species. The leg segments are banded, with one half of each segment lighter in color than the other half. The back often has a row of white spots (rarely orange or light blue), and there are a few white stripes on each side. Darker individuals lack these markings and are difficult to distinguish from black widows. ” This is an introduced species and according to BugGuide, it is found: “World wide in the tropical zone. It was introduced in Florida and has since been observed moving north through Georgia, and into South Carolina; it has also been officially recorded in California, Alabama, Mississippi, and Texas. ” Your photo also documents this behavior noted on BugGuide: “Brown widow spiders usually curl up into a ball, and drop to the ground as a primary defense. It is highly recommended that people leave this spider alone; observe, but don’t touch. “

Immature Black Widow
What's That Bug? does not endorse extermination


One Response to Brown Widow Spider