Two-Toned Multicolored Asian Ladybird
(05/08/2007) identify
Hi there, we just returned form a family vacation to Orlando, FL. While at Disney World, this little lady (or fellow) landed on my daughter. The odd thing is I have not seen a ladybird beetle with this very odd coloration.while I am adept at photoshop, I assure you this is how this critter looked!!!! 1/3 orange, 1/3 golden and 1/3 cream. There were no photos on your site that I could find showing this coloration, so thought I’d see what you had to say. Perhaps it’s completely common, but I’ve not seen one like it before. Thanks!
Tara
Photographer/Mixed Media Artist 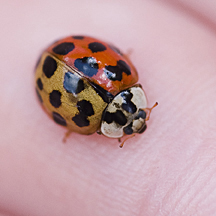 Hi Tara,
Thank you for confessing to your knowledge of Photoshop. This bicoloration is unusual. This is a Multicolored Asian Ladybird, Harmonia axyridis. It is the species responsible for huge aggregations entering peoples’ homes in the eastern U.S. We have located a wonderful table of color variations on a British website that also calls it the Harlequin Ladybird or Halloween Ladybird. BugGuide also has many photos of this species, but none like yours. BugGuide indicates that “The only consistent marking is a strip of color along the edge of the pronotum (between the head and the wings) but the color of that strip can vary from white to red. In the east, the pronotum is usually white with four black spots, which range from small spots to large patches that may blend together to look like a black M (or W). ”