Ladybug Pic for your Collection
I haven’t been able to ID it. 12 red spots on black background. Feel free to post it.
Roya
Santa Ana, CA 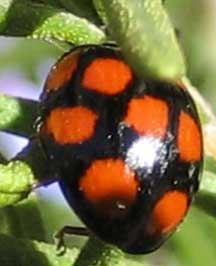 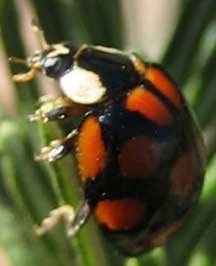 Hi Roya,
We cannot locate a match on BugGuide. We will see if Eric Eaton has a clue about this Ladybird Beetle.

Very exciting! Heres a head shot to help identify it and in case i’m mistaken about it being a ladybird.
Roya

Eric Eaton wrote back to us with this information: ” Hi, Daniel: My first thought is that this could simply be one of the color variants of the multicolored Asian lady beetle, Harmonia axyridis. I believe there is a chart somewhere out in the world wide web that shows some of the many variations for that species. I’ve contacted my publisher to suggest that they buy advertising for my book on WTB, if that agrees with you? You should hear from someone at Houghton Mifflin in the next week or two.
Eric “

Update: (03/10/2007)
Thanks Eric for the correct ID! Wow, I had no idea what a staggeringly variable species Harmonia axyridis is in terms of color morphs: it has an unbelievable degree of variation! Yes, that chart you are talking about does show this red-spotted 12-spot form at: http://web.anglia.ac.uk/appsci//lifesci/lifestaff/harlequin_01.htm And there is a picture of a somewhat similar Harmonia axyridis individual which has 12 orange spots at: http://zooex.baikal.ru/beetles/coccinellidae.htm
Susan