what is this horrible looking thing???
Hello, great site you have here. Been browsing it for a bit but still cant find this little chap on there! Found him under my carpet, with the cat sniffing near it. Don’t know if it came in off the cat, or if there is something in the house… It was found near my fireplace, which is not used and has a gas fire in front of it. The chimney is boarded up, but not sealed. Thanks for your help! I’m in the UK, by the way.
Ian

Hello again,
As well as asking you, I also asked the Natural History Museum insect dept. for some help, and they have sent a reply. Just though I would let you know, so you don’t waste any more time on this enquiry! It is a the larvae from a mealworm beetle apparently, and can be found in roofs/attics/chimneys where birds nest. hence why I found it in near my fireplace! Thanks anyway, and keep up the good work on a fantastic site! best regards,
Ian 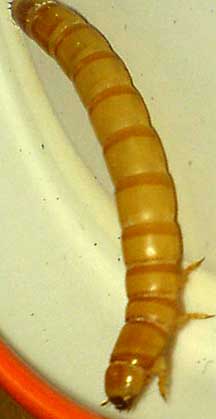 Hi Ian,
Thank you for your photo as well as the results of your inquiries. During normal business hours, we at What’s That Bug? are in the real world trying to make a living and normally answer questions early in the morning or late at night. We were unaware that the Giant Mealworm Larva, a Darkling Beetle in the genus Zophobas, were found in association with bird nests. It is very interesting.

Correction (03/28/2008)
I just wanted to point out that as Ian was told by the Natural History Museum, this is a Mealworm (Tenebrio molitor) which is not the same as a Superworm (Zophobas morio). Superworms are often confused with Giant Mealworms (the latter being a hormonally enhanced mealworm which grows larger for use as a feeder). While mealworms and superworms are both types of darkling beetles, they do have different appearances.