What’s this bug???
We have been watching quite a few of these in our back yard but they never stop long enough to photograph until today when I watched one bury a big grub. They don’t appear to be aggressive but looks like some kind of wasp? (And no it is not dead in the second picture, it was actually burrowing a hole!) Would love some info. Thanks
Maria 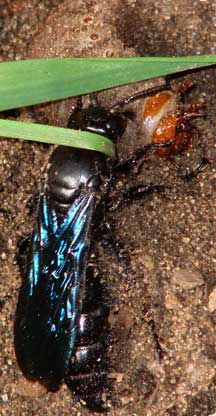 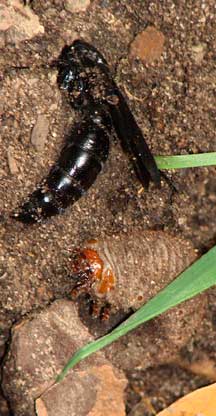 Hi Maria,
Wow, what wonderful images of a Scoliid Wasp burying a Scarab Beetle Grub. We are not sure of the species and plan to immediately research this. We only wish you had provided us with a location. It looks like it might be the genus Scolia, but BugGuide does not show any solid black bodies. Scoliid Wasps are large, hairy, robust wasps that prey on Scarab Beetle Grubs. The female digs a burrow and buries the Grub, laying an egg. the wasp larva is an external parasite on the beetle grub. Adult Scoliid Wasps take nectar. Though he could not substantiate the species identification, Eric Eaton did provide the following natural history clarification: ” Daniel: I can’t tell you anything about the identification, but the life history needs clarification. Scoliid wasp females simply dig up a scarab grub, sting it into submission, lay a single egg on it, and maybe cover it up before fleeing the scene. The scarab grub can at least partially revive and go about its business, but is doomed….The adult female wasp does not prepare a burrow or anything, like most sphecid wasps, spider wasps, etc. Eric “

We live in Engadine, a southern suburb of Sydney, Australia

Spider Wasp with Wolf Spider in Australia
Tagged with → food chain • WTB? Down Under
What's That Bug? does not endorse extermination