bugs of course!
Hi again,
You may remember me from my Christmas time request at identifying my cute little pie dish beetle? But I know how busy you are so I won’t be offended if you’ve forgotten me and my beetle by now – much!. Anyway the reason I’m bugging you (pardon the pun) is that since Christmas I’ve been lucky enough to have travelled right across our wide brown land all the way from Perth to Tasmania and as a direct result of that journey have two pics and one question for you. First I want to say that thanks to your wonderful website I was able to positively identify an egg case that had been carefully attached to our spare car tyre, which had to be transported in our pop up camper due to lack of space elsewhere, as belonging to a preying mantis. Thus their lives were spared as my husband had thought it was some kind of spider egg and was about to crush it. It was not until our trip was underway that it was discovered and as my hubby has a bit of a soft spot for preying mantis he was careful with it from then on. After crossing the Eyre Peninsula in 47c heat, I had a good idea that might trigger an hatching, and so it did, as two evenings later we popped up our camper to find hundreds of tiny preying mantis running about all over our stuff. We carefully removed them from the camper and left the remaining ones to hatch outside. In the morning we carefully removed the egg case and left them to battle against the funnel web spiders which were, unfortunately for them, abundant in that area. Hopefully they already had that species of preying mantis in Victoria, if not- well… they have now. Anyway to make a long story short, I took a pic of the hatch-lings that I thought you might like. The question I have is about the other picture, which I assume are assassin beetles obviously mating. Please correct me if I’m wrong about my identification. These bugs were photographed in Tasmania and many more were found all over town mating merrily. My mother, who lives there, told me that once these bugs couple, they cannot dis-attach, and so the bigger one, presumably the female? drags the little one presumably the male? around until he dies, and then what I don’t know? (not unlike some human marriages I believe) Anyway, I found this information a little hard to swallow, and although I hate to question my mum, I’d really like to know if this is so? Can you verify that for me? Well that’s if from me for now… hope to hear from you when you get time. Kind regards,
Jill Hardman
Western Australia 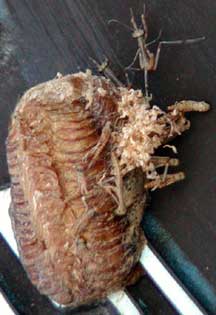 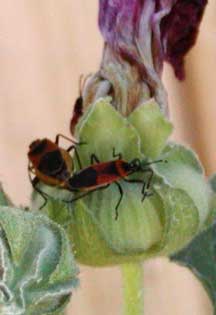 Dear Jill,
Thank you for the wonderful letter. You hatching Mantid Ootheca and accompanying details are fascinating. Your alleged Assassin Bugs are Hemipterans, which includes the Assassin Bugs, predatory species in the family Reduviidae, but they are a different family, possibly Lygaeidae, the Seed Bugs. Most definitely, they are a phytophagous or plant eating species.

Preying Mantis from Australia
Tagged with → bug love • WTB? Down Under
What's That Bug? does not endorse extermination