Bug of the Month: February 2007 – Third Fiddler Beetle from Australia in a week

What is it??
Hello there
Found this in Sydney Australia. Any idea of what it is? Thanks
Stuart 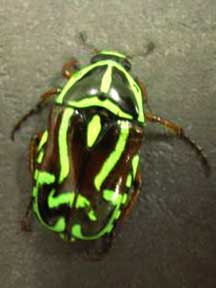 fOUND IT!!!!!! thanks!
Fiddler Beetles
Eupoecila australasiae
These beetles emerged from cocoons found in a pot of daffodils in Randwick. Other locations around Sydney where Fiddler Beetles have been recently found include Ingleburn, St Mary’s, Kellyville and Faulconbridge. They are common in heath and woodlands in south-eastern Australia. Adult beetles emerge from soil in early summer and feed on the nectar of flowers. The beetles lay eggs in rotting logs or in the damp soil under logs. The grubs feed on rotting timber and build cocoons of soil and debris in which they pupate. These attractive beetles are harmless to humans.

Hi Stuart,
We are thrilled that you identified your Fiddler Beetle. This is the third specimen we have posted this week and your letter is the first to arrive in February. It is time to post a Bug of the Month for February 2007, and since we have so many fans in Australia, we have decided to that this month we will feature the Fiddler Beetle. This will be the first Bug of the Month not found in the U.S.

Fiddler Beetle
Tagged with → bug of the month • WTB? Down Under
What's That Bug? does not endorse extermination