NOT Donkey Spider but Giant Crab Spider from West Indies

Bug Man,
I wanted to know what this guy was. I live in St Kitts, W.I. and the students call them donkey spiders. The only thing I found about “donkey spiders” on the internet was just other students talking about them. I think this one came in my apartment to read his last rights before dying. He wasn’t very lively. Do you know what they’re really called? Thanks you
R Fields 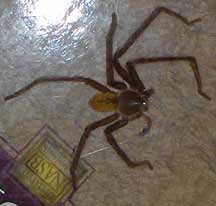 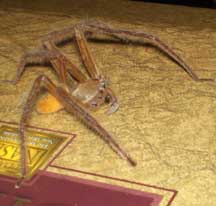 Hi R. Fields,
Though we have never heard the name Donkey Spider, we like it, and we are ready to add it to the common names for the Giant Crab Spider, or Huntsman Spider, or Banana Spider. This is a harmless nocturnal hunter that feeds on cockroaches. Thanks for adding a wonderful new name for these fascinating spiders.

Update: (02/05/2007)
About ‘Donkey Spider from West Indies’
Hi again Daniel and Lisa Ann,
I was interested to see the Giant Crab Spider or Banana Spider (Olios sp.) from St. Kitts; images which R. Fields sent in on 1/25/2007. I vacation on Nevis each year and St. Kitts is the sister island, only 2 miles away. English names are notoriously unreliable, but I believe that the creature which is usually referred to on St. Kitts and Nevis as the ‘Donkey Spider’ is the Antillean Tarantula, (Acanthoscurria antillensis), which is furry and colored like a donkey. The image of the one I found on Nevis is on your Spider Page 8, listed as ‘Caribbean Tarantula (10/05/2006)’ and described as a Donkey Spider. On the same page there is an image of what is probably the same species, ‘Tarantula from Dominican Republic (01/05/2007)’. I believe that on St. Kitts and Nevis, the giant crab spider (Olios sp. of the Sparassidae) is usually called a ‘Banana Spider’ or a “Yellow Spider”. Of course the two species are not at all closely related, but they are the two biggest spiders on those islands, they both only come out at night, and so I suppose some people might confuse them one with the other. They both can bite if you hassle them enough, but neither is dangerous to people. Best,
Susan J. Hewitt

Huntsman Spider from Indonesia
What's That Bug? does not endorse extermination