6 legs
This was spotted at Alnwick Castle, Northumberland, UK on a sunny (but not too hot) day in June 2006 It’s about 2 inches long. Never seen anything like it before. Note the sticky-up triangle at the rear.
Sam 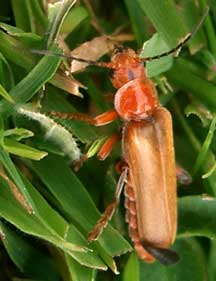 Hi Sam,
We believe this is a Soldier Beetle in the family Cantharidae, but we cannot locate an exact species for you. The triangle you mention are the wings. Beetles have a hard set of wings known as elytra and a soft set of underwings used for flying.

Update:  August 18, 2016
WE just received a new image and upon doing the research, we realized this Soldier Beetle was never identified to the species level.  We believe, based on these Nature Spot images, that it is the Common Red Soldier Beetle, Rhagonycha fulva,  and it is “A very common beetle throughout most of Britain.”

Soldier Beetle
What's That Bug? does not endorse extermination