Odd German bug…
Dear Bugman,
I’m currently studying abroad in northern Germany, in the vicinity of Bremen, and I did a search on the internet in hopes of identifying a bug I just saw. I found your website, and I was wondering if you could help me. I’m especially interested to know whether or not it’s harmless. I’m afraid I squished it in fear before I could take a picture of it while it was alive. I’ve attached a couple of pictures of it dead, though… (And I’m sorry I squished it, it’s just that I have a skin condition that causes me to react negatively to ALL bug bites. Even mosquito bites cause baseball sized reactions on me. If it doesn’t bite or sting, I remove it nicely from my house. My host parents here even taught me how to catch flies without hurting them.) In case the picture doesn’t tell all, I will describe it… It was really really tiny, to begin. It dropped onto my hand as a fly buzzed around my hand (at first I thought it was fly poop, that’s how small it was). When I looked closer, it appeared to have the body shape of a tick (though it squished much easier than a tick), and the body was brown. It’s legs were tiny and comparable to a typical beatle’s legs. Attached to the front end of it, by the head, where these long stinger like things. Two of them. One on each side, extending out in front of the bug. They were more of a reddish brown color, and looked very much like scorpion tails. These scorpion-like stingers were very large in comparison to the bug, and I would say they were three quarters the length of the body. If you can identify this bug, I would really be interested to know more about it. And feel free to publish my photos (though they’re not the greatest). Thank you!!
Penninah Jones 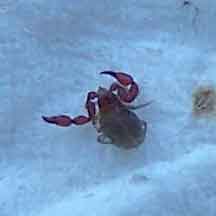 Hi Penninah,
There was no need to kill the harmless Pseudoscorpion. These fascinating creatures have a nearly worldwide distribution. They sometimes hitch rides on flying insects, a phenomenon known as Phoresy.

Pseudoscorpions
Tagged with → unnecessary carnage
What's That Bug? does not endorse extermination