Captured this guy in Iraq
We captured this guy one night in Iraq after he flew into our room. Nobody knew what it was or had even seen it before, even the few locals we had with us were clueless. Our best guess was maybe some giant termite.
Scott 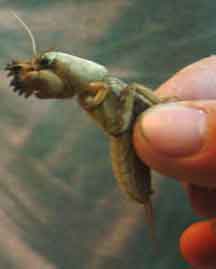 Hi Scott,
If it is not an animatronic spy in the guise of a Mole Cricket, it is the real thing. Mole Crickets are not true crickets, and they live underground. They use their powerful front legs to dig. They are found in many parts of the world including the U.S. This is at least the fourth image of a Mole Cricket we have received from Iraq.

Cave Cricket from the Philippines


2 Responses to Mole Cricket from Iraq