I know you’re busy, but look at my new buddy!
So I brought my pond plants inside over a week ago since the temps have started dropping rapidly. Today, I noticed a creature munching on my lizard’s tail plant. I really dig catepillars, so I don’t want to let him go outside because it’s been frosting at night. Can you give me an ID when you get a chance? This guy hails from west-central Illinois. I’m thinking that it’s some sort of Sphinx moth? I was tapping his rear to get him to move off of his leaf and he turned around and tried to get my finger!! I think I’ll set him up in an enclosure of some kind for I fear that he’ll perish in the temps right now. Thank you for your time, I appreciate it, and just like everyone else, I’m OBSESSED with WTB
Erika 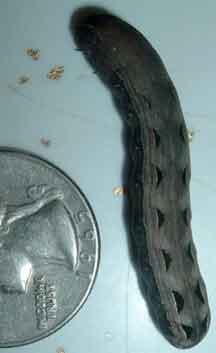 Hi Erika,
We have always just generically referred to this group of Owlet Moth Caterpillars in the family Noctuidae as Cutworms. BugGuide likes the more specific name Armyworm. Here is what Charles Hogue writes about the group: “All are general feeders and will eat most kinds of low-growing herbaceous vegetation, including grasses. The adults are all drab brown or gray moths with pale translucent hind wings. The fore wings have varied markings, but in many species there are noticeable found and kedney-shaped spots near the leading edge.” They are called Cutworms because they will cut a newly sprouted plant at soil level killing it. They are called Armyworms as they are sometimes found in large numbers that travel like army troops..

Mystery Pupa on Asparagus
What's That Bug? does not endorse extermination


One Response to Cutworm or Armyworm