Awesome shot! I got yelled at for going for it.
Hiya Bugman,
This summer I was visiting my in-laws in South Jersey and I saw an awesome sight at the Philly Zoo. This hornet was about three inches long and I have no idea what it’s got (a grasshopper?). my in-laws were angry when they saw this photo as they didn’t think I should have gotten this close. I figured he (she) was busy with its prey and wouldn’t care about me anyway. Who was right? BTW that area has all kinds of interesting bugs. I really liked to look at the caterpillar nests but never got a pic.
Monika 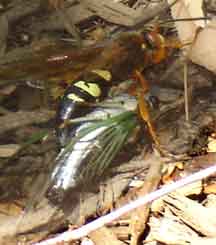 Hey Monika,
You go girl!!!! You are fearless and our new hero. This is a Cicada Killer wasp and it has paralyzed an Annual Cicada, colorfully known as a Dogday Harvestfly. The Cicada will be food for the young wasp. Cicada Killers are frighteningly large and suffer because of their fiercesome appearance. We have not gotten any reports of anyone being stung, and they are not considered aggressive.