Ed. Note: (09/30/2006) Though this letter came to us last year, the abundance of identification requests in late September and October influenced our decision to make the Black Witch Moth the Bug of the Month. It also has a great common name for the Halloween season.
(10/06/2005) What kind of moth is this?
Joe Greco 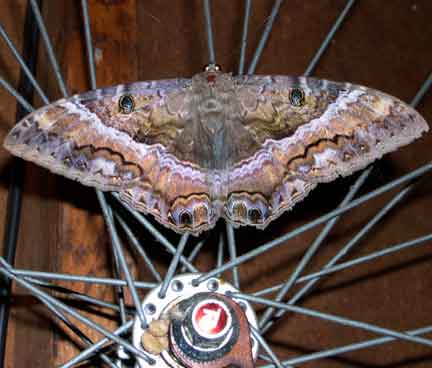 Hi there Joe,
The Black Witch Moth is very common in the tropical regions of Central and South America, and can also be found occasionally in Florida and the Gulf states. Occasionally specimens, usually females, are found in the North. In the Fall, they are even reported from as far north as Canada. When they fly around lights at night, they look like enormous bats. When we stayed in a country home in Puebla Mexico, they commonly flew into the house and rested on the walls near the ceiling until nightfall, when they would fly away. Thank you for a great photo.

Update:
(10/15/2005) Black Witch
Hola Bugman,
You seem to be relying on some outdated sources of information about the black witch moth, namely: Covell, C.V. 1984. Field Guide to Moths of Eastern North America. Houghton Mifflin Co., Boston. Powell, J.A. & C.L. Hogue. 1979. California Insects. University of California Press, Berkeley. 388 pp. Current taxonomy is: Ascalapha odorata. Both males and females (in equal proportions) migrate north starting at the end of May, not late summer. They regularly (probably annually) reach Canada, as I know of some 30 Canadian records. They are actually most common across the Southwest, not in the Gulf coast states of LA, MISS, Alabama… They do breed in the US as larvae have been found in Southmost Texas and due to their abundance in Florida, they much breed there as well. More BWM info here: North American Black Witch Records http://www.texasento.net/witchna.htm
Natural History of the Black Witch http://www.texasento.net/witch.htm
Black Witch – Storm Information www.texasento.net/witch_storm.htm
Early Northern 2005 BWM Records www.TexasEnto.net/witch_north.htm
Hope this helps…
Mike
Texas Entomology
www.TexasEnto.net

Bug of the Month May 2011: Brown Leatherwings Mating

Bug of the Month July 2017: Clematis Borer
Tagged with → bug of the month
What's That Bug? does not endorse extermination