Walking Stick
Hi there,
I was just wondering about a walking stick that I found this morning in my front yard. I live in El Cerrito, Ca. Is it common around my area? Do you know the name of the species? Also It’s about 3" long. Thank you for your time.
Gavin Lee 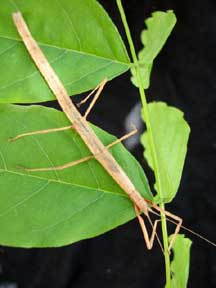 Hi Gavin,
Are you Gavin Lee the photographic artist who is a friend of Nechelle Wong? Sadly, we don’t recognize your species of Walkinstick as it does not match the two species Charles Hogue identifies from Los Angeles. Perhaps it is an escaped exotic. We will see if our favorite expert Eric Eaton has an opinion. Here is Eric’s response: “Oh, and the walkingstick….reminds me most of the western short-horned walkingstick, Parabacillus hesperus, but could easily be something else. Walkingstick diversity in the southwest is surprisingly high.” Eric later retracted his possible identification. Seems the antennae are too long. Here is what Eric wrote: “Gee, I don’t think I correctly identified that walkingstick from El-whatever, Califiornia. It could well be something exotic. Any chance he captured the thing? If so, I would suggest he make haste to his closest state agriculture person. You might even want to e-mail the image yourself to someone in the state ag department, or Doug Yanega at UC Riversice (dyanega@ucr.edu). I’ll watch the site for updates on that one. Eric”

Hey Daniel,
The unknown walkingstick is an Indian Walkingstick, Carausius morosus. It’s from India and it’s eggs can be purchased on eBay as fish food.

Walkingstick
What's That Bug? does not endorse extermination