Mastic Beach beetles
I sent you some pictures of the tiny beetles we have last week but it was from an email account I’ve been having problems with. I haven’t seen them posted nor did I get a reply so I’m sending you them again from an email account I know works. I’ve been through all of the beetle and ant pages and nothing posted looks like these creatures. Photos are all of dead bugs, the live ones won’t pose for me: IMGA0981 – several on the handle of a plastic knife; IMGA0989 – best I could do for a closeup of the head area
Thanks for your help.
Jeff
nevermind searching
I found the bug on another site, it’s as follows: Sawtoothed Grain Beetle (Oryzaephilus surinamensis): The Sawtoothed grain beetle is another very common pantry pest. It does not feed on intact whole grains, but feeds on many processed food products such as breakfast food, bran, dried fruits, nuts, sugar, chocolate and macaroni. It is especially fond of oatmeal and birdseed. These flat beetles can even get into sealed boxes and packages of food. Adults are nearly 1/4-inch long, slender, brownish-red and active. Their name comes from the six saw-like teeth on either side of the thorax behind the head. After finding a potential food, the female lays white, shiny eggs that hatch into yellowish-white larvae. There can be as many as seven generations each year, but sawtoothed grain beetles often stop breeding in the winter, unless buildings are heated and moisture is sufficient. Adults are very long lived and remain active in the winter. The habits and traits are a perfect description and I think the source is the food we get for our parrot. Here’s the link to the other site and a copy of the photo. Between my closeup and the description I think I have a match. 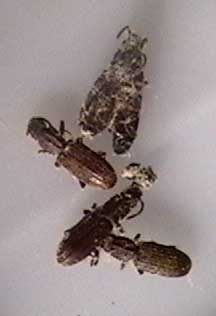 Hi Jeff,
Thanks for the information, and sorry we have been slow, but we could literally spend 24 hours a day answering letters, which is impossible. There is another closely related species, the Merchant Grain Beetle, Oryzaephilus mercator, that looks very similar. According to Hogue: “Its distinguishing feature is a small swelling on the head behind the eye which is lacking in O. surinamensis.” Your closeup seems to indicate this swelling. We favor the Merchant Grain Beetle.

Mexican Swallowtail – Giant Swallowtail or Thoas Swallowtail?
hi Bugman!
I wrote a few weeks ago after I found a caterpillar I could not identify. I gave it a habitat and let it do it’s thing. I came home to a beautiful swallowtail yesterday! I originially thought it was an ‘orange dog’ caterpillar — but it wasn’t quite the right colors.

Then I found a Mexican website (I live in Tucson Arizona) and was able to see it was some sort of swallowtail larva. I have attached a photo sequence of caterpillar, to chrysallis, to butterfly. 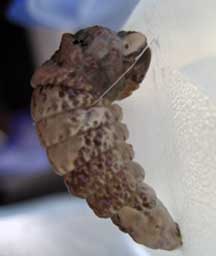 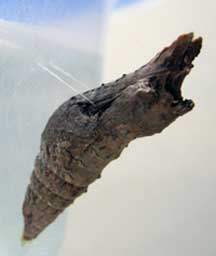 It’s happily fluttering about my yard now, but I think I got some good pics while it was in my care. This time I sent web-ready versions if you want to post them. I’m having trouble determining if it’s Giant Swallowtail or Thoas Swallowtail. See:
http://www.mariposasmexicanas.com/papilio_heraclides_cresphontes.htm
and http://www.mariposasmexicanas.com/papilio_heraclides_thoas_autocles.htm
I cannot really determine (even by Googling) if the lower wing red markings are classic of either species since my swallowtail has more red going up the lower wing. Either way, it seemed to be a mexican variety (sandy coloring) of the usual dark brown/white orange dog caterpillar. I love your site! You got me hooked and trying to identify this critter! Thanks!
Adrienne

Hi Adrienne,
Thanks for all the photos and research. According to BugGuide: The Giant Swallowtail is “Distinguished from P. thoas by the larger spots forming in the lower left leg of the X on the front wing. ” Your specimen has small spots on the forewings, so we favor Thoas Swallowtail. Here is just one more link with information.

tarantula hawk/wasp
No question — thanks to being directed by a friend to your site, I figured out what my bug was. However, I thought it may be worth using on your page because it’s a pretty good closeup of the tarantula hawk.
Thanks!
April
Tucson, AZ 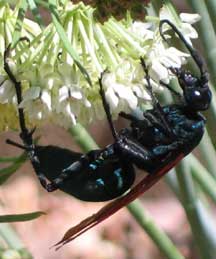 Hi April,
Your photo is stunning. Thanks for sending it in.

Rosemary Beetles
Hi Bugman
I emailed you a few days ago regarding the beetles feeding on my rosemary plants, well ive done some research and ive discovered they are Rosemary Beetles ! Apparently they are new to the UK and are the Royal Horticultrual Society’s NO.4 Pest ! they like rosemary, sage, thyme and lavender. They are native to south Europe. A laboratory culture of the rosemary beetle has been established in the entomology laboratory at Wisley where its life cycle is under investigation. Preliminary results of this research indicate that rosemary beetle adults remain inactive on their host plants during the summer months (June to August). In late August and September the beetles resume feeding, mate and begin to lay eggs, which they continue to do on warm winter days until spring. The eggs hatch within two weeks and the larvae feed for approximately three weeks before entering the soil to pupate. The pupal stage lasts for a further two to three weeks before adults emerge.More info available at
http://www.rhs.org.uk/research/projects/rosemary_beetle.asp
If you do find these on your plants its best to remove them by hand, since you would most likely would use the herbs they feed off.

Thank you so much for the information, photo and link.

Moth I.D
Hi Bugman
I wonder if you can I.D. this moth. Looks like a kind of sphinx but I’m not sure.. Thanks in advance
Sam Stone

Luna Moth – Dying?
Good morning, Bugman!
We’ve had an adult Luna on our always-shaded front porch for over 24 hours, resting on the hinged side of the screen door, one wing on the door itself and the other on the door jam trim. It is disturbed each time the door is opened, but it doesn’t fly away, only occasionally repositioning a leg. My husband said it’s probably dying. Can you tell us what their dying ritual is? Does their hanging around in this manner a part of it? Although I’m thrilled at the possibility of having a real (albeit dead) Luna, I’m sad that it might be in its last hours. Thank you for your website. Found it while researching Luna, and am forwarding the link to my 10-year-old grandson who will enjoy it immensely.
Best!
J.D. Dirkschneider
Fayetteville, GA
Quickly learned how to use our digital camera. Here’s a photo of our esteemed visitor, convincing hubby that yes, the porch does need to be painted. 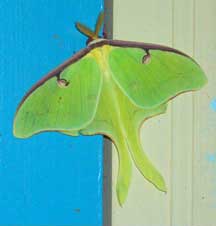 Hi J.D.,
Since Luna Moths only live a few days, they are always hours from dying. Your photo is beautiful and we love the porch.