Pachylia Scyses scyses?? Or Fig Sphinx?
I love your site as you must realize because I keep sending you things to identify. I found what looked like a ficus sphinx on your site, but the caterpillar is totally different from those shown for this moth. The caterpillar and the moth are shown in these two photos. The caterpillar ate ficus leaves. It began making a pupa shortly after I took photos of it and the moth that emerged is the one shown here. I live in Costa Rica.
Mary Thorman 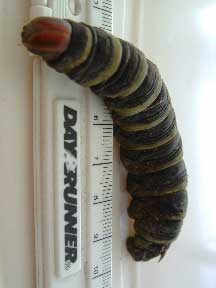 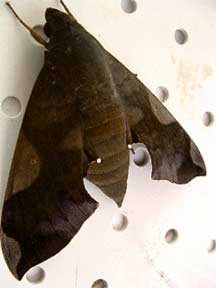 Hi Mary,
You have a Ficus Sphinx, Pachylia ficus. The caterpillars have several different color variations. Thank you for sending in this awesome striped variation. To add to the confusion, there are subspecies and regional variations. Caterpillars are notoriously difficult to identify which is why the host plant is so helpful.

Correction:  January 8, 2012
While researching a new submission, we stumbled upon this old posting and we realized that Mary was in fact correct.  This is the caterpillar and adult of Pachylia syces, a different species in the same genus as the Fig Sphinx.  Comparing Mary’s images to those on the Sphingidae of the Americas reveals our original error.

Metamorphosis of the Achemon Sphinx

Sketches of the Metamorphosis of Xanthopan morgani
What's That Bug? does not endorse extermination