little black bugs
First found these bugs in the bathroom all over the walls and burrowing in bathroom towels. They are approximately 2mm. A few days later I am starting to find them on the walls in other parts of the house. Maybe they are coming in on the dogs? I live in Miami. 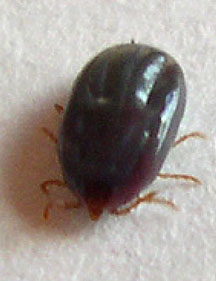 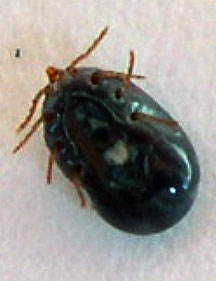 Dear Floridian,
We strongly recommend that you seek professional help. At first we thought this was some species of Soft Tick, Family Argasidae, but people have written in convincing us it is a Hard Tick. Dog Ticks are Hard Ticks in the family Ixodidae. We cannot tell you exactly what species you have, but we did locate information online about the Bat Tick, Carios kelleyi. If you have bats in the attic (we were tempted to say bellfry, but didn’t want to offend you) then that is a good possibility. Another possibility is the Common Fowl Tick, Argas radiatus, which can be found near chicken coops and possibly pigeon roost. Maybe there are birds in the attic. According to Wikipedia: “Soft ticks typically live in crevices and emerge briefly to feed, while hard ticks will attach themselves to the skin of a host for long periods of time.” and “Ticks are second only to mosquitoes as vectors of human disease , both infectious and toxic.” According to the UC Davis site: “Some soft ticks seek hosts by questing on low-lying vegetation, but the vast majority are nest parasites, residing in sheltered environments such as burrows, caves, or nests. Certain biochemicals such as carbon dioxide as well as heat and movement serve as stimuli for host seeking behavior. Soft ticks feed for short periods of time on their hosts, varying from several minutes to days, depending on such factors as life stage, host type, and species of tick. The feeding behavior of many soft ticks can be compared to that of fleas or bedbugs, as once established, they reside in the nest of the host, feeding rapidly when the host returns and disturbs the contents.” Once again, we strongly recommend seeking professional assistance as ticks can bite humans and they do carry diseases. Eric Eaton wrote if questioning the Family: ” Don’t know that the bloated ticks are soft ticks. Remind me more of “regular” hard ticks, though have no idea what genus, species, or even family for that matter. We need to find you an acarologist.”

Your 3/19 tick from Florida is most defintely an engorged hard (Ixodid) tick, as opposed to a soft tick. A slightly clearer picture and we might have a better chance at identifying it. The story about the house being infested with them doesn’t make much sense, since we don’t usually think of ticks “infesting” an area. I also wonder a bit about delusory parasitosis–do you get a number of those in your submissions? Love the site….
Bryon

Thanks for the correction Bryon. We do get Delusory Parasitosis questions, but we only post the best ones. They never come with images though.

Ticks
What's That Bug? does not endorse extermination


2 Responses to Invasion of Ticks