Two spiders?
Hi Bugman. I have two pictures for you. The first is a diminutive spider I spotted on my back fence above my compost bin this morning. Can you identify it and tell me a little about it? I’ve never seen one shaped like this. 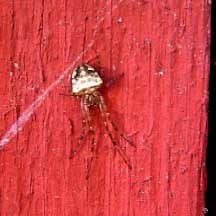 The second photo is gratuitous. I believe you may have received photos of similar spiders before, but it’s such a gorgeous bug I thought I’d send it anyway. I took the picture in Belize in Nov. 2003. Can you confirm the species?
Thanks for your help!
Ryan in Northern CA 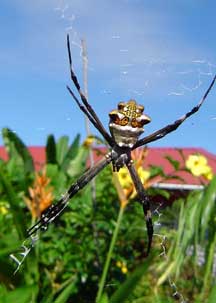 Hi Ryan,
Your Belize spider is a female Silver Argiope, Argiope argentata. It is a tropical species which is also found in the Southern Continental states. Your small spider I am less sure about. It is difficult to tell based on your photo. It might be a male orb weaver which are often smaller and differently colored than the more commonly seen females.