Unknown beetle
Hi.
Stuart from Tucson again. This time I have an unidentified beetle hanging out on an ocotillo in the back yard. Looks like it could be a species of long horn beetle but I am not sure. The speciman was approximately 1 – 1 1/4 inches from head to toe (not including the antennas or what ever you call those on a beetle).
Thanks,
Stuart 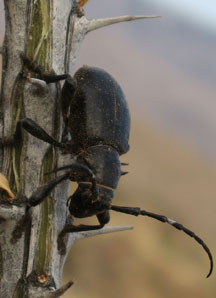 Hi Stuart,
We have reservations saying this is a Female Prionus, though that is our best guess at the moment. Certain anatomical features seem inconsistant witht he genus. We will check with some real experts to get you an answer. Eric Eaton provided the following identification: ” Ah-ha! Well, you have the right family:-) This longhorn beetle is in the genus Moneilema, the “cactus longhorns.” They are rather large, flightless, and mostly nocturnal, venturing out at night to feed on fleshy cacti, especially Opuntia prickly-pear and cholla. As larvae they mine at the base of the cactus, or in pads that are prostrate on the ground. The adults are thought to mimic Eleodes darkling beetles, even standing on their heads at times as if prepared to spray an attacker (as Eleodes can do). Very interesting beetles, and quite common, even if not often seen. Eric “

Longicorn is Synaphaeta guexi.
What's That Bug? does not endorse extermination