insect ID
Hi I’ve recently posted a picture of, what I think is a grasshopper, on Flickr, it’s so striking it got me wondering what it was. I’ve been unable to find any similar images on the internet. This was taken in Wilderness, South Africa, on the south coast, it was taken in January 2000. I would guess it was 50-50mm long. I caught this monster by the side of a track in South Africa. Took me a long time to convince myself it was real. Be interested if anyone can identify it. Thanks for any help.
Regards
Rob Hamblett 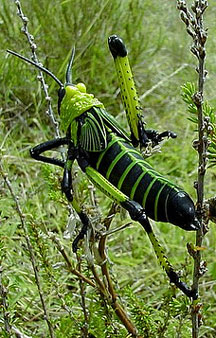 Hi Rob,
What a stunning specimen, but alas, we don’t recognize it. Perhaps one of our readers will. Sure enough, Eric Eaton wrote in: “The lime green and black grasshopper is in the family Pyrgomorphidae. Don’t know what species, though. Perhaps Phymateus leprosus, and a nymph rather than an adult. Eric”

Update (02/04/2006)
Phymateus leprosus
Dear Bugman:
About the lime green & black grasshopper: I have to agree with Eric Eaton that the grasshopper is probably P. leprosus, sometimes referred to as Maphyteus leprosus. I have linked a great photo of an adult found on the web. The two large “knobs” at the front of the thorax are diagnostic, i believe, of P. leprosus. The nymph in question also exhibits these structures.
Chad Lensbower