On February 3, 2006 · Category: Cockroaches Tagged With: WTB? Down Under · Add Comment

Should I kill myself now, or what?
Dear Bugman,
Having just moved to Florida from the north I am TERRIFIED of getting a cockroach infestation in my apartment. Having said that, I moved down here and lived in a place where I saw two German Cockroaches on separate occasions. I moved into a new place about two months ago. Your web site helped greatly. Now this series of events has happened: a) found a cockroach slightly bigger than a German Cockroach but a dark red like an American Cockroach near my patio door, and killed it, this was after I had moved some boxes and while the lights were on; b) found some roach crap near my microwave days later; and c) caught the big dark red cockroach in this photo sneaking out from under the microwave tonight. I think the Intenet helped me identify this ugly bastard as an "Australian Cockroach." Evidently they aren’t as bad at infestations as Germans or Americans since they don’t get nearly the same press coverage. I haven’t seen any other evidence of roach activity anywhere in my apartment. Please help me if you can. What kind of cockroach is this? Do I have an infestation or just an annoying visitor or two? Can I expect a huge sack of eggs to break inside the outer walls of my microwave, unleashing a torrent of cockroaches I will never fully destroy? What should I do to prevent cockroaches from entering my home?
Floridian In Need 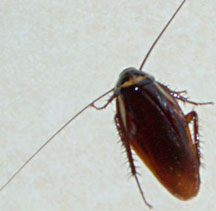 Dear Needy Floridian,
We agree with your identification. The Australian Cockroach, Periplaneta australasiae, is not as invasive as the German Cockroach. The pale stripes at the edge of the forewings are the distinguishing feature. According to BugGuide, they are a tropical or subtropical species that will feed on almost anything. We don’t really consider ourselves to be experts at intervention, but Don’t kill yourself.

Immature Cockroach from Australia may be Small Ellipsidion

Mitchell’s Diurnal Cockroach from Australia
Tagged with → WTB? Down Under
What's That Bug? does not endorse extermination