Preying Mantids
I recently came across these pictures which I had taken with my digital camera in October 2005. I live in the pinelands in southern New Jersey and was excited to find these Preying Mantids on my mother’s front porch. They sat still for a very long time, and didn’t seem concerned at all with the ogling and maneuvering I did in my attempt to get some decent photographs of them. The strange thing to me is the fact that there were three of them involved (hard to see in one of the pictures), which I assume to be two males clutching one female. Maybe one fellow is waiting his turn? They appear to be very patient creatures… more patient than I since I didn’t have time to stick around and see if she left any survivors.
Shari 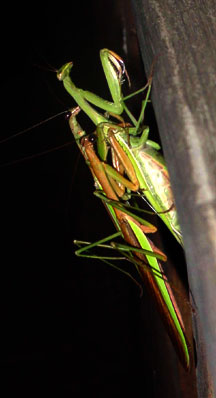 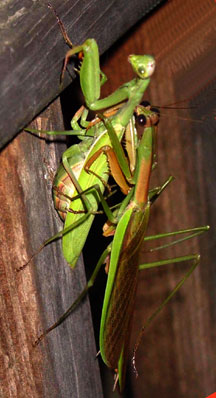 Ed. Note:  Thanks to a reader’s comments, we now know that these two Chinese males are attempting interspecies coupling (or should we say tripling?) with this European female.