Can you help ID?
Looks like a leaf beetle but I can’t find out what kind in any of the books I have. This is a photo of just a few of them. We want to do some organic farming near by but hopefully not plant what they want to eat. What are they? What do they eat? They are in northern California (near Petaluma) in the many many thousands. Why are they meeting along a flooding ditch in the winter? Thanks for your help!
Pete 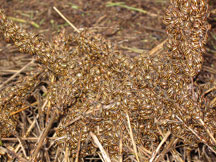 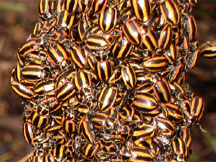 Hi Pete,
We don’t recognize your beetle, which we believe is either a Chrysomelid, a Leaf Beetle or our suspicion, a Coccinellid, one of the Ladybird Beetles. We are waiting for a response from Eric Eaton. 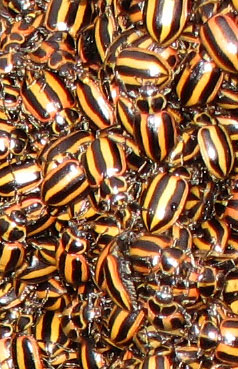 Eric Eaton’s Response: ” Believe it or not, those ARE lady beetles. More specifically, the striped lady beetle, Ceratomegilla vittigera (this is what I suspect to be an old name, and one would have to look for the more current synonym). I was not aware that this was a species that formed aggregations. We would love to add this species, and these images, to Bugguide (hint, hint). Eric ” Certain species of Ladybird Beetles form aggregations during the winter months in preparation for hibernation. We are requesting your permission to post this to BugGuide if you don’t mind. Eric later added this: ” Proper name for the striped lady beetle is Paranaemia vittigera. Apparently aggegations are not uncommon. I just didn’t know that. Eric “

It is fine to use the photo’s as you see fit. I have attached a close up and another group shot to help confirm the ID. Also one photo of the bad (from a gardener’s viewpoint) company the keep – diabrotica beetles. I sure hope they are ladybird’s.
Pete 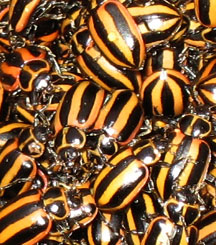 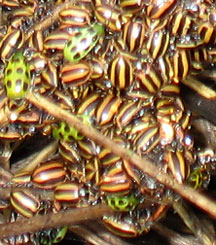 Hi again Pete,
Thank you for the additional photos. The cohabitation photo with the Spotted Cucumber Beetle, though blurry, is very interesting. We will post to BugGuide as well.

Pupa and Larva of a Multicolored Asian ALady Beetle