Scary Australian bug
Hi,
I saw your site listed as a Bonzer site on This Is True a little while back. When my wife found this terrifying bug last night, I immediately thought of you in trying to identify it. My wife went to the loo last night and saw this thing sitting on the top of the doorframe. She exited as quickly as possible and called me. After about ten minutes of spirited discussion we summoned up the courage (and tools) necessary to approach it. I took the first photo after we’d managed to knock it on to the toilet floor. After that I took it outside, emptied it from the container we’d captured it in and executed it. I took the second photo this afternoon, just so that you could see the bottom of this creature in case it helps with identification. I’ve failed to identify it from anything I could see on your website. I had a look on BugGuide, and I’m *guessing* that it fits in the subclass Apterygota. I live in Lauderdale, Tasmania, Australia. The bug is roughly 4cm from the head to the end of its abdomen, and the terrifying spike thing on the back adds almost another 2cm. I’m not sure whether I want you to tell me that it’s dangerous, and that I’m therefore justified in killing it, or that it’s harmless so I can sleep at night without worrying that more will turn up. We found a dried up husk on our front porch which obviously belonged to one of these, so we know there are more around. Anyway, I hope you like the pictures, and I hope you can tell me what it is!
Yours,
John 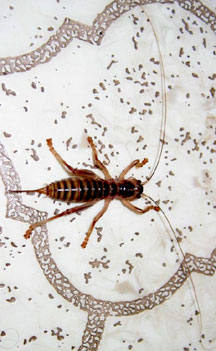 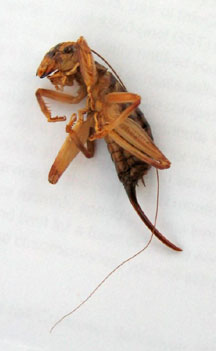 Hi John,
We can assure you this gal was perfectly harmless. It looks to us like a Weta, a primitive Orthopteran that is endangered in New Zealand. There are close relatives in South Africa and Australia, and the North American relatives are the Potato Bugs. In New Zealand, the Giant Wetas can grow to 8 inches. Here is the Wikipedia page with more information.

Update:  February 1, 2014
This is a female King Cricket, Australostoma australasia.

Weta from Australia is King Cricket
Tagged with → unnecessary carnage • WTB? Down Under
What's That Bug? does not endorse extermination


One Response to King Cricket Carnage in Australia