Mysterious empty bug??
Hi!
I’m a frequent visitor to your site. I absolutely love it! soo cooool.
I was going through some camping pictures when I found this picture that I took last year. Me and my friends could not tell whether it was alive or not, and were kinda grossed out by it because it was quite large. I thought it was alive because it was still hanging on to the tree. And although the picture I’m attaching shows the bug horizontally, it was vertical. My friend tried testing if it was alive or not by poking it with a stick. what resulted was a "CRUNCH" and the bug seemed to … collapse, as if hollow inside. We speculated that maybe it was a shedding of a bug that was left behind. but I have no idea whether bugs "shed" or not. Maybe the bug died, and all of its insides decomposed?? do you know what bug it is and why it was seemingly empty inside?
Brenda from Ontario. 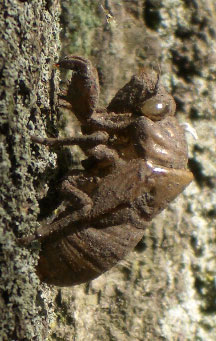 Hi Brenda,
This is a Cicada Skin. When the immature Cicada, which lives underground, is ready to metamorphose into a winged adult, it digs to the surface, climbs up a tree or other vertical surface, and splits its skin, freeing the winged adult.

Is this Wasp a Parasitoid of this Cicada???