Pigeon Horntail Photos!
Me again, (Cindy from Ajax, ON). Here’s my last email to you guys. The reason I originally checked out your site was to identify this creepy looking wasp that was crawling up the brickwork of the front of our house. Now that I know it’s a pigeon horntail, and that you had a hard time of getting pictures – here you go! Two of the pics aren’t in great focus, sorry. But one is good. I was kinda afraid of it and didn’t take the time to set up the macro feature on my camera. I’m curious, do these things sting or bite humans? Also, by the description on your site, it appears to me this is a female. One of the pics looks like she’s trying to lay her young in the brickwork. I don’t live near a forested area, but do live in northeast America. Would just north of Lake Ontario be an area where these are typically found? I’ve never seen something like it before. Lastly, is September a common breeding time for them? I took this last year in September & noticed the person who sent you a picture recently took it last month, September, as well.
Again, really cool site.
Cindy
Ajax, ON CANADA (just east of Toronto) 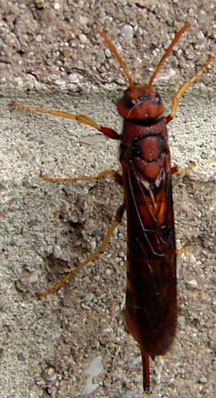 Hi Cindy,
Our DSL signal went dead the day before you wrote and we just regained it yesterday. We are working overtime to post some of the mail that came in during that week (477 letters). Pigeon Horntails do not sting. We don’t know for sure what the breeding season is. Thanks for the image.

Wood Wasp
What's That Bug? does not endorse extermination