Good Photo of Mormon Cricket
Hi again. I just emailed you some pictures of craneflies and now I’m sending along a picture of a Mormon Cricket I took last year while visiting Idaho. Your site is fantastic for identifying bugs. I did know what kind of cricket this was because a local told me when I took the photo. I wish I had put something down to show the scale, however, I do believe it will be one of the better photos you have of it.
Regards,
Cindy
Ajax, ON CANADA (just east of Toronto) 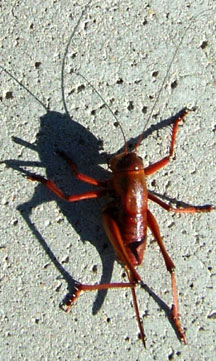 Hi Cindy,
Sorry for the delay but we had DSL problems (no signal). As we had never seen a Mormon Cricket with such a light coloration, we inquired as to Eric Eaton’s opinion. Here is his response: “Mormon crickets come in a variety of colors, but it could also be something related. Sorry to be non-commital, but sometimes photos just aren’t enough. Eric “

Possibly Cattail Katydid
What's That Bug? does not endorse extermination