Green Lynx Mother
Hi Bugman,
You probably tire of hearing it, but your website is *the* best insect reference on the web, bar none. I know from studying your site you really like the green lynx spider, so these will probably not be your best bunch of photos — I am continually amazed at the quality of the photos your readers send in — but I wanted to share them with you anyway. I have a small specialty crop farm, and as such have quite a large insect population, both beneficials and harmful species. I started noticing the green lynx spiders on my basil crops, and then they quickly discovered the sunflowers and zinnias and seem to prefer them. A few months ago, a big, beautiful female green lynx started living on one of my giant sunflowers. It was interesting to visit every day and see what large insect meal she had nabbed. Most of the time we were thrilled to see she’d captured another glassy-winged sharpshooter or tree hopper or leaf hopper (all cool insects, but hard on my flowers). Sadly, she also caught a bumblebee or two, but such is the price to pay to keep her around doing pest patrol. As her sunflower house started dying, we were able to successfully move her to the zinnia bed. She was surprisingly amenable, but it probably was because by then she was pretty large with eggs. In fact, it was hard to imagine how she could still creep up on or jump out at prey. After we moved her to the zinnias, she chose this lime-colored flower (naturally, it is a good color for her!) as her new home. A couple of weeks later, we found her with her new egg sac on the underside of her flower. Not long thereafter, we caught the edge of Hurricane Rita and her high winds. We thought this would bother Mama enough to move her babies, but she merely picked another green flower stem to move them to. A few weeks later, they started hatching. As you’ve mentioned, she is fiercely protective. Every time we go to peek at their progress, she comes out and situates herself between us and them. It appears they are all hatched now. It took several days. They are still hanging out close to Mama, but growing quickly. We’re hoping many decide to stay on with us as part of our Pest Control Department.
Laurie 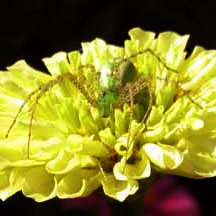 Hi Laurie,
What a wonderful letter. It is nice to hear our readership sharing wonderful critter experiences instead of the endless stream of erradication questions we field. Confidentially, we have taken to just deleting those without answering. We do have a streak of vanity and never tire of getting compliments on the site, but we maintain the site would be nothing without the readership. You are far too humble. Your photos are every bit as great as others we receive. thanks for your contribution.