From the monthly archives: "September 2005"

Tiger Swallowtail Caterpillar
Hi guys, great site you have, I’ve really enjoyed it! I thought you might like this pic of a Tiger Swallowtail cat taken from the predator’s perspective!!!
Peace and Blessings to All!!!
Cliff
Montreat , NC 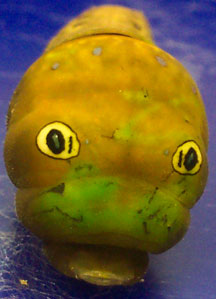 Hi Cliff,
Awesome image. It is clearly understood how these eyespots, which are not real eyes, work as a protective device. The innocuous caterpillar take on the appearance of a large predatory reptile, easily startling and repelling any hungry bird that stumbles upon the tasty morsel.

Dear Bug man,
Hello my name is Justin Holohan. I teach 2nd grade at West Amwell School. One of my students brought in this cocoon thing as asked me what it is. I TEACH MATH AND READING NOT INSECTS!!! So hopefully you can help! They found it on their house and it looks as if something has nested inside the branch. (It looks like a juniper branch) I also saw something very similar in central Jersey. But they were attached to a pine tree. We live in the wooded area outside of the city of Lambertville. Which is just 20 minutes north of Trenton NJ. Thanks for any help you can provide!!
Justin Holohan
West Amwell School
Lambertville NJ 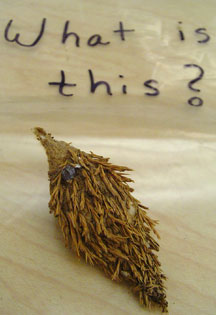 Hi Justin,
In the interest of education, we are pleased to help. This is a Bagworm, Thyridopteryx ephemeraeformis. This is a moth. The caterpillars form the bags as a camoflauge and protection and never leave the bags, dragging them along as they eat. They are fond of juniper, arborvitae, other conifers and some deciduous trees. The caterpillars also pupate in the bags. You have a pupa. The bags are sometimes found in such numbers they appear on branches all over the trees. The pupa are often found on the siding of homes. The female moth is flightless, wingless and legless but manages to leave the bag when she emerges. Males will mate with her and she crawls back into the bag to lay her eggs. We have an entire page devoted to this insect and you can show your student the response by visiting our site where it is prominently featured on the homepage.

WTB
I have never seen anything like this befor here in Michigan.
Thanks
Evan Owens 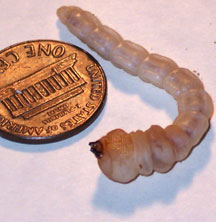 Dear Bugman I found this bug (Wood Boring Beetle Grub) in the yard and it’s all sand I was working in Rosscommon on a house in the woods but about 1 acre of it is all sand where i found it .no grass and no wood pile and no wood in the imediate area, but was close to the driveway. Thank you again for your help.
Evan

Hi again Evan,
We have a new theory. Perhaps the grub was living in cut lumber. There are species that can emerge as winged adults years after construction.

Hi there, This wasn’t meant as a discourtesy as much as it was meant to comment on the lack of information in the query. We stand chastised and will post your comment beneath our original response. At least we didn’t use email shouts in our response which was actually meant to be funny. Occasionally a joke will fall flat. We hope our unintentional rudeness hasn’t cost us a reader. We still love the letter with the Pseudoscorpion in the cereal, and in actuality, we did identify it.

Evan Responds: (10/01/2005)
Sorry everyone took it as rude, I took it as funny, As in, where did you find it? I did not feal insulted or put down in any way. I guss I should of put LOL after I found it by the driveway , (LOL) But I also appreciate the concern of your readers, And I thank them too. The home is over 10 years old and it’s a modular home, And the wood is all treated lumber that we where using, so how it got there is beyond me, and your guess is probably better than mine (LOL) and there is about 100 acres of woods there . P.S. im not in to bugs much, but i do like to know what it is im looking at when i do see one I’ve never seen before and im glad I found your website, I now have it saved in my Fav. websites. and I thank you for your help.
Evan

Additonal Information
(09/30/2005) Evan Owens Ash Borer
Hello Bugman,
I’ve been appreciating your site for some time, since ID’ing a Great Golden Digger Wasp flying around hoarding Katydids in my wife’s flowers, and regularly click on it to see what’s up on your main page. Thanks for the work you’re doing. I’m just writing to shed a little light on a picture on your main page. I’m from northern lower Michigan and the boring worm that Evan Owens on 9/29/05 has pictured is an import that is giving the forest service around here fits. Since it is a newcomer to Evan, it is likely an Emerald Ash Borer grub, and it kills trees, specifically Ashes. Southeastern Michigan has had its parks and woods practically culled (an estimated 8 to 10 million trees since their introduction in 2002) of Ash trees over the past few years, and the insects are continually spreading as people move firewood (containing the voracious larva) to northern and western campsites in our state, Ohio, and Indiana. If Evan, or anyone else that spots them, is outside the known range of these pests, Michigan has a hotline for reporting their spread and disposal sites for infected wood (866-325-0023.) Michigan also quarantines areas and bans the transporting of firewood but the rules are all but unforcible. The best tool right now for stopping them is early detection and eradication, but that will only come with education. For further information, here are some very informative links that include pictures of the insect, where it came from, and efforts to contain it:
http://www.emeraldashborer.info/
http://www.michigan.gov/mda/0,1607,7-125-1568_2390_18298—,00.html
I know your site isn’t dedicated to removing pests, but this is one exotic that could use the boot.
Weston Tulloch
Bay City, MI

Thank you for your insiteful letter Weston. One comment we would like to add is that many Wood Boring Beetles have similar appearing grubs and this might actually be a native species. We also stand by this being a Cerambycid and not a Buprestid which the Emerald Ash Borer is. Cerambycid grubs have much larger heads.

Cotton Stainer Bugs?
Hi,
I am from Singapore and I found these bugs on the cotton plant. The nymphs at bright red without any markings. Please kindly help to identify. Thanks!
Best regards,
Yueat Tin 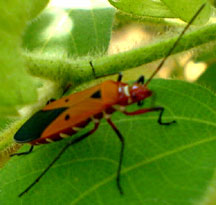 Hi Yueat Tin,
This sure does appear to be one of the species of insects known as Cotton Stainers. They are in the Red Bug Family Pyrrhocoridae.

Big bug in garage
Hi Bugman:
I live in Phoenix, and when I went to grab the dust-buster the other night, I nearly wound up with a handful of heart attack. Can you identify this beast? Or at least which planet it came from? I also found one at the bottom of my pool a couple weeks ago.
Thanks,
John 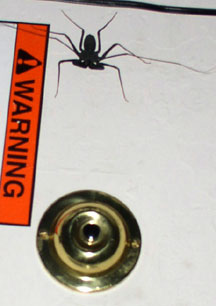 Hi John,
Despite the warning sign which gives us endless amusement, the Tailless Whipscorpion is harmless. It is a shy desert dweller often found in dark damp areas.

Rino
Better pics of the Rino, Hope you can use them.
Danny 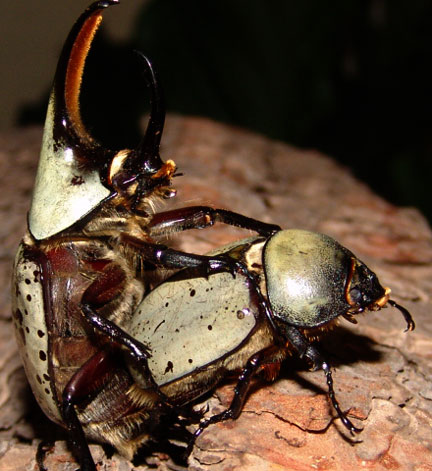 Ed. Note: We have put in a request for Danny to provide additional information on this image. Is he raising the beetles? or were they found in the wild? Only time will tell.

I sent you a few pics last week, they were found in Payson Arizona. I do have 3 males and 5 females. I will try to raise any offspring. The pics sent last week were taken on the spur. in the current photos I was able to use a tripod. How about that bug luv.
Danny Lee