Dragonflies Do It in the Netherlands

Hello..
Here are two photo’s from Venray the Netherlands.. Was enjoying my little homegrown wheed when suddenly these two came flying by.. Just had to take their picture, as they were making love right under my nose, little perverts. Perhaps something for the buglove page, but what i’d like to ask is why the male (bottom) is sticking it’s face up the girl’s butt? Is there some kind of smelly spot there he likes? I see this behaviour one multiple of your hosted photo’s and was just wondering if the little creeps have the same behaviour as humans..
Best regards
Fred 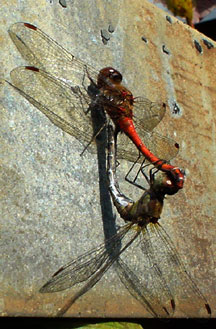 Hi Fred,
Though quite logical, there are a few errors in your observations. First, and most importantly, you have mixed up the sexes. The female does not really have her head in the males butt, but he has grasped her head with his anal claspers. Here is a great explanation of the dragonfly mating activity from a wonderful site. “It takes newly emerged adult dragonflies a number of days to become reproductively mature. Since males generally mature faster than females they usually arrive at the breeding grounds first. In the period of time before females arrive the males stake out territories that they defend from males of their own and other species. The size of a dragonfly territory depends on the species and on the density of males in the breeding ground. Generally speaking, the larger the species the larger the territories and the more densely populated the area the smaller the territory. Dragonfly mating behaviour is quite elaborate and can take place either in flight or on a perch. Just prior to mating males must transfer sperm from their reproductive tract to special accessory genitalia. Once this is done males then chase flying females and grab them by the thorax with their legs. After a male has caught a female he then curves his abdomen towards her and latches onto her head with a set of special posterior abdomial appendages, called anal claspers. These claspers maintain a firm hold on the female and they can even at times dent her eyes. The male then releases his legs so that the pair remains attached in a head to tail position, often referred to as the tandem position. The female then bends her abdomen towards the male until her primary genitalia come into contact with the male’s accessory genitalia. This position is often referred to as the wheel. Dragonflies often assume this wheel position while still in flight which is quite an acrobatic accomplishment. While in this position sperm is transferred to the females’ reproductive tract via the male’s penis. In some species the males have a specialized penis that is designed to scrape out any sperm that already exist in the female’s reproductive tract from previous matings before sperm from the current mating are transferred (Thompson & Dunbar 1988). This adaptation helps to ensure that the last male to mate with a female is the one who’s sperm fertilizes most of her eggs. It is, therefore, important for males to make sure that no other male mates with the female before she lays her eggs. As a result many male dragonflies guard their mates until they have laid their eggs (McMillan 1991 and Thompson & Dunbar 1988). In some species the male even maintains his grasp on the female until she has finished laying her eggs, while in other species the male simply guards his egg laying mate by hovering over her. Once the female has laid her eggs the pair go off in their separate directions. All unreferenced information was gathered from Askew 1988, Corbet et al. 1960, and Walker 1958. “