MYSTERY DESERT INSECT
Mystery Insect
I found this insect while camping in the desert in southeastern California. Its colored exactly like the rock formations in that area. I caught it on a fence post in April of 2004 but it died on the way home. I’ve been collecting insects since I was 5 but I can’t figure out what this is. I thought it might be an immature cricket (without jumping legs!?). The specimen in the pic is 1/2 an inch long and had antennae that were about as long as the body and similar to a cricket’s. Please help. Thanx for any info.
Myke Miazio
San Diego,CA 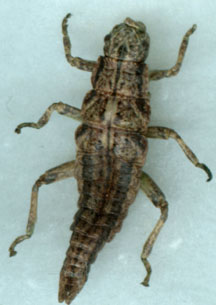 Hi Myke,
This is a relative of Walkingsticks known as a Timema. They are found in the west and feed on oaks, ceanothus and firs.

Another Walkingstick from Puerto Rico

Mating Muskmares
What's That Bug? does not endorse extermination