Nursery Web Spider with her Eggsac

large NC spider in hollow tree
Dear WTB,
I have greatly enjoyed your website. I originally found it when trying to identify the spider in the attached picture. At least i think it was the same kind, because that time i did not get a picture of it. Several months later, amazingly, i saw another one and was able to get a decent picture of it. I live in Durham, NC, and both times i saw this type of spider it was in a local NC State Park (two different parks). Both were originally just outside the hole in a hollow tree. Both skittered back into the
tree in a sort of clicky, crablike, alien way. All i know about the first one is that it was BIG. This one has at least a 3 inch leg span, maybe 4. The first time i was too spooked out to get any closer, because i never got a chance to look at it while it was still. This time it lingered a little longer outside the hole, so i could see that it was at least a spider and not something from another planet. So i looked up in the hole and saw it beside a big white thing. As i was watching, it grabbed the white thing and moved further up in the tree (it was dark, so maybe i was mistaken and the white thing was attached to it / carried by it the whole time instead of beside it… all i know is… when the white thing moved with it, it freaked me out). My friend put his digital camera in the tree, pointed it upward, and blindly took several photographs with the flash. The attached picture turned out to be pretty good and i thought, given the size of what i can only assume is its egg ball, that you would at least find it interesting if you can’t tell me what it is. I thought the egg ball was at least quarter size, but i don’t even want to think about how huge that would make the spider. I’m going with “at least 3 inches” to be safe, since i know the mind can magnify these things in retrospect.
thanks in advance!
jonathan (and terry, the picture-snapper) 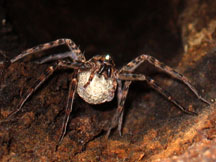 Hi Jonathan and Terry,
Fabulous image of a female Dolomedes Fishing Spider, also known as a Nursery Web Spider. These large spiders do not build webs, preferring to stalk their prey. They are usually found near water and can run across the water as well as dive beneath the surface where they can remain for a half an hour. They sometimes catch small fish. That is the eggsac she is carrying. She will protect it fearlessly. When the time comes she will spin a Nursery Web and deposit the eggsac. This is the only web she will spin.