Bugs of VT
I have photos of some insects that were taken in Southern Vt. near Albany, NY. I didn’t take the photos but I’m supposed to name them. I hope you can help. 2 Photos Attached. Sincerely, mrsvgrant 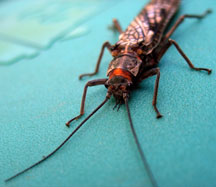 Hi Mrs V Grant,
Your one photo shows a Stink Bug or Shield Bug in the family Pentatomidae. The other insect, and the one we are interested in posting, is a fabulous photo of a Giant Stonefly in the family Pteronarcyidae which includes the giant salmonflies famous among flyfishers. The giant stonefly of the East and Midwest can be either Pteronarcys dorsata or Pteronarcys picteti. Sadly, we have not been able to determine which species you have as internet information is sketchy. More information can be found on the American Stonefly Page which has an image that matches yours but is not correctly identified. The range map of P. dorsata includes many areas around Vermont, though Vermont is not listed. P. pictetii ranges relatively far from Vermont, being concentrated in the Midwest. By process of elimination, we believe you have Pteronarcys dorsata.

Winter Stonefly
What's That Bug? does not endorse extermination