Result of bug love?Hi, Bugman,
For your ID’ing pleasure, here’s a photo of a what we suppose are (were?) bug eggs on the outside of a window in our house in the woods in southern West Virginia. Each stalk is about 3/16 inch, including the little blob at the end. The blobs were originally rather transparent, with a tan dot in the center. The next day Julian noticed that they were white; they’ve been white ever since (several weeks). For what it’s worth, the spider that lives at the edge of this window apparently doesn’t consider the blobs and stalks to be food. Can you please tell us what they are and what you think accounted for the change in appearance (and anything pertinent that we haven’t thought to ask)?
Many thanks!
Ellen and Julian
Victor , West Virginia
PS: For about 9 months last year we watched a similar group (with white blobs) on the outside of another window and didn’t see any change in them. We were hoping that they would hatch into something! 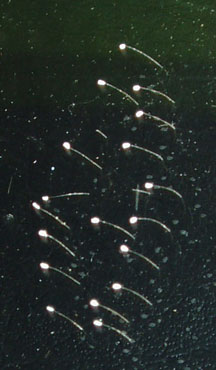 Hi Ellen and Julian,
Mother Nature has developed this ingenious method to perpetuate the Lacewing. Immature lacewings are fierce hunters, and if eggs hatched, the young would quickly devour one another. The female Lacewing deposits each egg at the end of a stalk, so by the time a newly hatched Aphid Wolf or Aphid Lion climbs down, its brothers and sisters have already wandered away.

Brown Mantisfly
What's That Bug? does not endorse extermination