what bug
Hi,
I saw this flying bug the other day. It was digging the hole in the ground in front of it. I’m pretty sure it was getting ready to lay an egg or eggs in it. When I came back later in the day the hole was filled in. I had seen one of these bugs a few days prior and it had a green catepiller that it had captured. (Unfortunately by the time I got the camera it was gone). I have an idea that it digs a hole, lays the egg or eggs and then puts prey in the hole for the larva to feed on but this is just a guess. I suspect it is some kind of hornet or wasp but can’t find it in my insect book. I live in south west MT
Thanks
g morgan 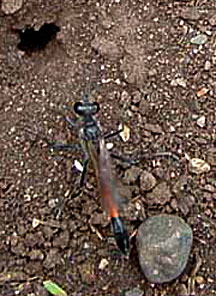 Hi G.,
You are good. This is a Thread-Waisted Wasp, Ammophila species. It lives in open areas throughout the US and Southern Canada. Adults feed on nectar and larvae eat hairless caterpillars and sawfly larvae. Female digs short burrows in sand or light soil, enlarges a chamber to receive immobilized insect prey, and lays an egg. Larva feed initially on nonessential tissues, later eats indiscriminately, killing host. Thanks for the great image. Try to get it with a caterpillar as well since the female will seal the nest and return with more food.

Cutworm Wasp
What's That Bug? does not endorse extermination