Love your site! A new website record for you–number of bugs per inch
Here’s a picture that has got to be a record for the number of bugs per square inch. A bug buddy of mine tells me this is a Nicrophorus (negrita?) carrion beetle (about the size of a large bumblebee). Hard to tell with all the pinhead-sized phoretic mites covering it. After some "Googling", I found that the mites actually have a mutual symbiotic relationship with the beetles (although they really were a hindrance to this beetle!). The mites use the beetle for transport and then destroy blowfly eggs and other competitors of the beetle at the carcass. This beetle could hardly get in the air, but it managed to fly through my back door (buzzing loudly) and crash around before I could catch it. I’m not normally scared of bugs, but this was a little creepy. Since they’re all good guys, back out the door they go! I’ll try to get a few more pix before I do that. The mites kept running around quite rapidly as well, which probably didn’t help.
Janet Sugino
Brinnon WA (Olympic Penninsula area) 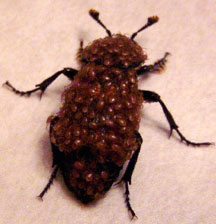 Wow Janet,
A killer photo as well as the research that needs to accompany it. You are awesome.

Update from Barry M. OConnor (05/23/2006)
Mites on burying beetles. These are as you indicate, phoretic mites in the family Parasitidae, genus Poecilochirus. Species in this genus all have obligate relationships with silphid beetles. Although they will feed on fly eggs, they also feed from the vertebrate carrion as well.

Woman Plagued by “Fuzz Ball with Eyes” AKA Dust Bunny