don’t know what this bug is – can you help?
Hi,
I took the attached pictures on Wednesday, July 20th. When I found this bug it was just sitting on something. I didn’t see it move at all. It has wings but I didn’t see it fly. In the picture, you can see someone’s thumbnail for scale reference. I live in Burlington, Vermont if that helps to identify the bug. I haven’t ever seen anything like this before. thanks
Devon 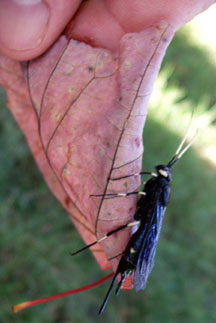 Hi Devon,
This is a Smoky Horntail, Genus Urocerus. They are found in mixed and coniferous forests mostly in the west, but a few species are found in the east. Adults drink nectar and larvae eat wood by tunneling through the sap and heartwood.

Update: Urocerus albicornus
(08/03/2007) Corrections on some ID’s
Dear Bugman,
Today I found a very eye-catching specimen of Urocerus Albicornis, the White-horned Horntail, wandering around on a Douglas Fir in extreme NW Washington State (near Ferndale) and laying eggs. I didn’t know what it was, but I captured it in a very high-tech device (empty paper soda cup courtesy of Burger King!) and brought it home, and after doing a little web-research, found out that it was the critter mentioned above. Actually, it was your website that really helped me make the leap forward finally – I wasn’t getting very far on any of the other so-called “identification” sites. So anyway, after I verified what it was, I tried to get some more information about it, but there doesn’t appear to be very much other than a very very few pictures. Almost NO information to speak of online. However, in the course of my ferreting around I finally came back to your site, and found several other pictures of this very dapper bug. But it looks like they are mis-identified, so I wanted to let you know. In response to the posting by Devon on 7/22/05, you state that it is a “Smoky Horntail,” and in response to a posting on 7/28/07 by Peter, it was ID’d as a “Wood Wasp…might be Urocerus Albicornis.” There were also several other postings that look very much like this bug, only the wings are more rust-colored – these are ID’d as Urocerus Californicus. (9/12/06 by Annie and one other, I don’t remember the date/poster though). I do have to apologize for not taking a picture of it for you guys before I released it, it was a real beauty. I’m glad I didn’t kill it though. … Also, must say, GREAT SITE!!!! Totally fascinating, to say the least. I spent WAY more time browsing around looking at all the cool bugs than the time I needed to find out about the Horntails. Two thumbs up!
Sean in Ferndale, Washington

Sawfly Larva: What does more damage? A Sawfly Larva eating Leaves or a Crew Cutting Branches???

Pigeon Horntail
What's That Bug? does not endorse extermination