What is it?
This was on a chrome bumper, or I wouldn’t have seen it. On a tree it wouldn’t get a second look. Any idea?
Thanks,
Tom Cassidy
Benton Harbor, MI 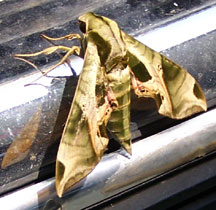 Hi Tom,
This is a Pandora Sphinx, Eumorpha pandorus, formerly the genus Pholus, and sometimes called the Satellite Sphinx. It is a beautiful olive green and pink moth that rarely flies after dark, preferring dusk to feed on flowers. The larvae feed on Virginia Creeper and grape and adults fly from June to August in the north and longer in the south.

Obscure Sphinxes, we believe
What's That Bug? does not endorse extermination