Hello Bugman,
I was woken up abruptly this morning by my wife who wanted to warn me that there was a spider stalking my pillow. I captured it and took some pictures for you. I would like to know what it is. Any time I see a spider which doesn’t look like some relative of the prolific wolf spider, I always want to know what it is 😉 I live in Reno Nevada. Some description: This spider seems to be unable to climb glass, unlike most I find around here. It’s very timid despite being found on my pillow while I was sleeping. It races to the other side of the glass any time I want to take a picture of it. Thus the poor quality images. It’s a bit smaller than a dime, and is extremely fast. It seems to teleport around occasionally, however it started moving slower once it was in the glass for awhile. The two fangs in the front appear to be white and fuzzy. Also, I could have been hallucinating, but the grey stripe on it’s back looked red to me when I first caught him. looks very similar to a small version of the spider that was sucking Sheppard’s neck off in Stargate atlantis to me. 😀 Maybe that’s why it was on my pillow. Close call, phew.
Eluusive 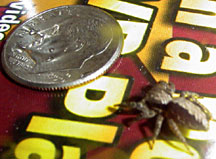 Hi Eluusive,
Nice letter. You have a Jumping Spider from the Family Salticidae. Like Wolf Spiders, they are hunting spiders. Jumping Spiders are diurnal hunters that do not build a web. They depend upon their excellent eyesight to spring upon flies and other insects they encounter in their wanderings. They are harmless.

Excellent! Do they really change color or was I hallucinating? He’s very happy to know this information, as I was able to release him outside on bail now that I know he’s not some kind of mutant killer spider. Also, I have some more pictures I thought you might like. I found this guy a few years ago when I lived in northern california (Ukiah to be specific). It was a very frightening experience. (It looks very vicious.) I’d never seen a spider that big other than a tarantula. So I did some research, It looked like some type of Argiope from Europe, all the USA types I found didn’t even look close. I don’t think they’re native to that area of california, either that or they don’t like the limelight at all. I only saw one of them in 16 years of living there. It was interesting to find out that they are the real “Garden Spiders.” We always had always thought of Garden Spiders as these little spiders that sort of look like wolf spiders but are completely white. Unlike the wolf spiders, the white “Garden spiders” liked to dangle from the ceiling inside the house and scare you if they managed to get in. (I’d put my finger up and steal their tether line and dangle them about and take them back outside. Any idea what the white ones were if they aren’t garden spiders?) So are you an entomologist, or just a like bugs?
Sha 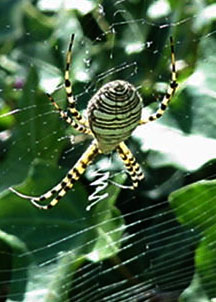 Hi Again Sha,
This is a Banded Argiope, Argiope trifasciata. It is native. The white spiders you ask about are probably Cream House Spiders. Don’t tell anyone, but we are not entomologists. This site started as a lark and now is out of control. It takes many hours of research for some postings, hence the lagtime between receipt and answering.