the strangest bug i’ve ever seen in my life!
I was hiking at McConell’s Mills in Western Pennsylvania and happened across this bug sitting in the middle of the street. It appears to me to be some sort of beetle larva, but it’s SO big. It also had this fancy move it did when we touched its head with a stick – it would curl its tail under [which was soft like a catepillar’s body] to quickly launch itself backward a few inches. Here it is pictured with my boyfriend’s finger [who, for scale, is 6’4″]. And here is another better picture of its face. I also have a video i took of it walking and doing its cool backwards launch maneuver, which you can have if you’re interested. PLEASE tell us what kind of bug this is. We’re absolutely dying to know. I almost regret not taking it home with me! I just hope it didn’t wander back into the middle of the road. Thanks!
Jen and Glenn
ps. We also found a bunch of these really pretty red and black millipedes, which i’ve included a picture of. They were about 4 inches long. 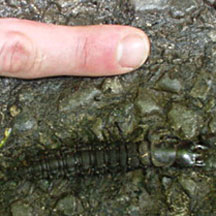 Hi Jen and Glenn,
You have just encounted a Hellgrammite, the larval form of the Dobsonfly. These curious larvae are prized by fishermen as bait.

Hellgrammite
What's That Bug? does not endorse extermination