Eucalyptus Beetle Larva, we have learned

What is this bug??
Hi Bugman,
We have had lots of these little critters in our den lately – and my husband and I have NEVER seen these before- we live in a wooded area in Southern California w/ lots of Eucalyptus trees. We find a few a day lately- and are so curious as to what they are and what they do and where they come from and how we can get rid of them! HELP! Thanks mucho!
Warm regards,
Jody Tsouo 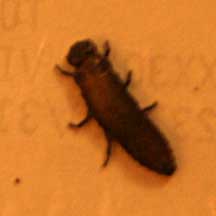 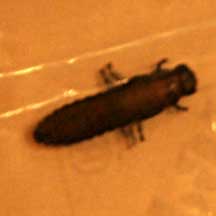 Hi Jody,
Our first thought was perhaps you had some type of beetle larva, but we checked with Eric Eaton who thought that it might be one of the Rove Beetles. Your photo is a little unclear and the fact that you shot through plastic didn’t help.

Thanks for getting back to me- and yes, they do seem to be in somewhat of a larvae stage- when they move, their whole bodies shorten and extend, almost like a lizard or snake. I’ve been obsessed w/ them wondering what they are, and have been watching them quite closely 🙂 I did a search online of rove beetles, and the ones we have look nothing like any rove beetle listed on this site. They don’t move fast at all either- and they tend to “Cling” when you try to grab them. I am having a pest person come over in a little bit to try and identify them- their 6 legs are in the upper quadrant of their body- and when I tried to grab one yesterday, this yellow fluid came out- wasn’t sure if it was waste, or trying to defend itself. It was bright yellow though. I’ll let you know what they say- he said if he couldn’t ID it, he’d send some up to the Cal Agro people… I can try and take some better shots if you want.
Warm regards,
Jody Tsouo

Hi again, Just found out that they may be lady bug larvae- since the pest guy wasn’t 100% sure, he’s sending them to the California Agro people to see what they say- the funny thing is we have seen a few lady bugs around lately- and just thought they were good luck! He did find a few dead lady bugs that were tan in color, and hadn’t fully developed to their red color yet.
Warm regards,
Jody Tsouo

Let us know what the California Agro people have to say Jody. Eric Eaton also agrees. He wrote back: “Ah-HA! The lady beetle larvae answer seems much better, though I would have expected some red markings somewhere….”

Update:  California Eucalyptus Beetle Larva
October 28, 2011
Thanks to a comment from sundeeavila, we now know that this is the larva of a recently introduced species of Leaf Beetle, the Eucalyptus Leaf Beetle, Chrysophtharta m-fuscum.  The UC Riverside Entomology site has a nice profile on the species that contains this information:  “Eucalyptus leaf beetle is a new pest of ornamental eucalyptus and was introduced from Australia into southern California around 2003. It is not controlled by native parasites or predators. In Australia it is commonly known as one of the eucalyptus tortoise beetle species. It is known as an outbreak pest of commercial E. globules, blue gum plantations in southeastern Australia.”  Here is a matching photo of the larvae.

Twelve Spotted Cucumber Beetles might be repelled by radishes

Possibly Leaf Beetle from South Africa
What's That Bug? does not endorse extermination

What is this?
I found this bug (dead) on the ground while camping at a lake in the dry central valley of California last August. It is far larger than a quarter and has a blue iridescent shine. It appears to have a small stinger and the curly antenae lead me to believe it is some kind of hornet. I have never seen anything like it here in CA! (It has a piece of straw hanging out if its mouth, which was kind of funny!) Can you tell me what it is and if they are normally seen in this region?
Jen 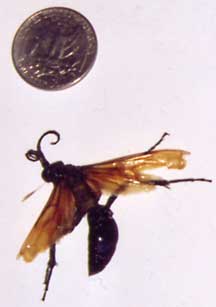 Hi Jen,
You found a dead female Tarantula Hawk genus Pepsis. They are found in arid regions of California. Females are recognized by their curved antennae. They are easily recognizeable by their blue-black bodies and orange wings. Large females can grow to two inches, though we have seen even larger ones in Baja California Norte, Mexico. The female locates a tarantula, stings it to paralyze it, drags it to a burrow and lays a single egg on it. The egg hatches and the larva feeds on the still living tarantula, a fresh food supply. The females can also deliver a painful sting to people.

Spider Wasp and Spider from Malaysia
What's That Bug? does not endorse extermination

what kind of spider is this
I found this spider in my house what kind is it and is it poisonous. ITS HUGE!! Thanks
Brandy 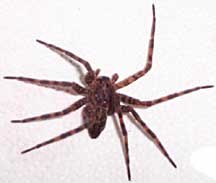 Hi Brandy,
Yes, the Fishing Spiders can be startlingly large. All spiders have venom, but few pose a danger to humans. Your Brownish-Gray Fishing Spider, Dolomedes tenebrosus, which is also known as the Dark Dolomedes, is harmless. They are amazing spiders, and are usually found near water. They can dive below the surface and remain there motionless for thirty minutes. They also catch small fish. They breath air that is trapped by hairs on their bodies. It ranges throughout New England, into Canada and other areas of the Eastern seaboard.

Blue Spider Web from Chile
What's That Bug? does not endorse extermination

ew gross! help!
Hi-
Please help: we have wormy, larva-y, crawly things in our apartment. They are on our bed covers, under them, on our drapes, and on our keyboards. I finally saw some crawling on the ceiling. I spotted on near a hole in the ceiling. We live in Brooklyn, NY, in the top floor apartment with drop-down ceiling right under the attic. There are lots of cracks and holes for them to crawl out of the ceiling. They are yellow-ish in color with dark heads and ends. At the back end, there are 2-3 long attenae. They have many many tiny legs (centipede-ish). They are very small– the larger ones are only a few millimeters long, the small ones are super tiny. I spotted a small black beetle-type bug a few days ago, which I’ve never seen before in this apt. But, only one, so I don’t know if the two are related… We’ve lived here for over a year and a half and have never had bug problems before. Are these bugs beetle larvae? Can you identify them from the below pics? Any tips on getting rid of them? Please help!
Thanks so much,
Angela in Brooklyn 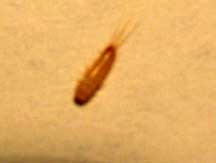 Hi Angela,
You have Dermestid Carpet Beetles, probably genus Attagenus. Adults are shiny solid black or brown beetles. Larvae are slender with long hairs at the end of the abdomen. You first need to find the source of the infestation and then seek profesional help.

Carpet Beetle
What's That Bug? does not endorse extermination