Colorful Spider
Would like to know what this colorful fellow is. Took the picture on Maui , Hawaii on the way to a little waterfall. Then I saw it on a Hawaii travelogue but they didn’t identify it.
Bill 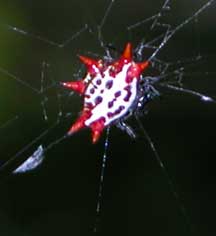 Hi Bill,
Your Crablike Spiny Orb Weaver, Gasteracantha elipsoides, ranges throughout the continental United States, being most common in Florida and other parts of the South. Obviously, it also lives in Hawaii. They build enormous webs, expecially considering that the spiders are a mere 1/2 inch in size. Thank you for the beautiful photograph.

Sighting of Orbweaver causes spike in heart activity
What's That Bug? does not endorse extermination