what’s this bug!
Moved into an apartment in November 2004, its on the 2nd floor of an old house here in Toronto. I’ve now found two of the same small but disturbing bugs, which I’m having difficulty identifying. The first was found in a newspaper which was on the floor by a recently acquired 1970’s organ. The other between photo’s in a plastic box (crawled into?) which was again on the hard wood floor in the same room. They look like very small crabs. They are a brown/red colour, have 8 legs, and two very long arms with claws at its front. The body is about 3mm, while the span of the arms/claws seem to be about 10mm. When disturbed, they pull in the arm/claws, and legs looking like a small brown bit of dirt. Attached is a photo of the first one, dead. Tried to save it but it died within a few hours of finding it (had it outside, cold here in Toronto!). Any help would be great!
Thank-you
Mike. 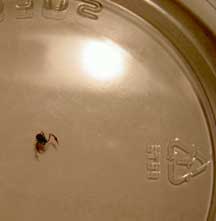 Hi Mike,
Your Pseudoscorpions are not only harmless, they are quite helpful as they will eagerly eat many household intruders that do damage. Despite their small size, they will even capture houseflies. Those claws are quite lethal for small insects and other arthropods.