mystery bug
Good day Bugman! I have been searching everywhere for someone who has the knowledge to help me out! I am currently living in Taiwan, and have recently moved into a new apartment. My landlord told us that this apartment had been vacant for about 10 months before we moved in. Well, I started seeing these strange spots on the walls, and realized that they moved imerceptibly! Taking a closer look at what I initially thought was cobwebs (because they like to move up and down the wall in the corners where 2 walls meet), I discovered they are in fact alive! When I squish them, they are as thin as paper, and there is no crunch or resistance of any kind. The black protrusion you see coming from the bottom can protrude from the top or the bottom, but not simultaneously. It has no big range of motion, and has a very tentative hold on the surface it is against. This one is on the outside of my toilet bowl. And you’ll notice that this one has an orange coloring, very distinct. Most of the ones I’ve seen have been all brown and mottled, resembling tree bark, without this orange splash. There never was any big population, I found maybe 10 in the whole 3 bedroom apartment when we moved in. Since then, I’ve found maybe a dozen more, and these at long intervals…since this one on the toilet bowl, I haven’t seen another for 2 weeks or so, and so it’s not a question of infestation or management, I just can’t seem to find anyone who can tell me what this is! I hope these pictures and this information reach you alright, and I am eagerly anticipating your response! Thanks again for your excellent site, and I hope to hear from you soon!
Kimberly 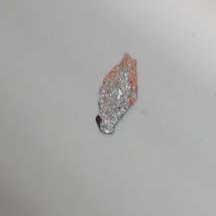 Dear Kimberly,
You have Case-Bearing Moth larvae probably Phereoeca fallax or a near relative. The small larvae carry a noticeable case made of fine sand and debris. The case, which is about a quarter to half an inch long, is flattened on top and bottom, expanded at its center and tapered at both ends. They are often found on walls (both outside and inside) of houses and other structures. Larvae are said to feed primarily on insect remains, fur, flannel, and hair: they do not seem to be a clothes pest. We have gotten many letters from Florida regarding Case Bearing Moths.