Caterpillar ID
Hi,
Found this guy on our walk. He is about 4″ long or so and husky. Looks like a curled up green leaf. Has double horns near his head and a spike at the tail. He is very strong. Let him go in the garden. Hope it wasn’t a mistake. He went on his way.
Thanks in advance for any help.
Kathy 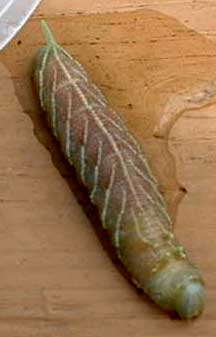 Hi Kathy,
It looks like you have a Four-horned Sphinx also known as the Elm Sphinx (Ceratomia amyntor). Your photo doesn’t really show the horns as pronounced as in other photos we have seen. It eats leaves from elms and basswoods, and is also reported from birches and cherries.

Tersa Sphinx Caterpillar
What's That Bug? does not endorse extermination


One Response to Four Horned Sphinx